Just 5 km away from Areopolis you will find Limeni – one of the most beautiful seaside villages of the Laconic Mani. Situated on the shore of Aegean Sea, at the slope of a steep mountain, Limeni enchants visitors with magnificent landscapes and unique views. On the rocky shore of the village, you will see a gamma of scenic stone-built houses hanging over the water. Just a few steps away, you will find a relaxing beach and plenty of traditional taverns serving fresh fish and local delights.

The visitors of Limeni can also explore the history and culture of Mani by visiting the famous local sights that still remind the glorious past of the region, such as the Petrobei’s Palace – a four-story Tower-castle which belonged to Petrombei Mavromichalis, the military leader and the last ruler of Mani who played an important role in the Revolution and post-revolutionary era. You can also admire the impressive traditional architecture by visiting the charming local churches and chapels, such as the chapel of Agios Sostis, the church of Agios Nikolaos and the ruins of Panagia Brettis church.

Built on a dry and barren landscape, completely unprotected from the fury of the winds, Areopolis stands at the entrance of Mani. The settlement was created at a very strategic position, on the rocky hill that lies at the foot of Mount Prophet Elias Sangiá to control the main road of South – South West Mani. Once called Tsimova, it was renamed (after Ares, god of war) in honour of its role as the starting place of the War of Independence in 1821, when the Maniot clans laid their grudges aside to fight the Turks.

Enough of its towers survive to give you a taste of its glory days. Several elements (eg. campanile of the Archangels and the tower-houses of Mavromichali Kapetanakou and Barelakos) emphasize the vertical dimension. The tower-mansion of Kapetanakos (built after 1830) was gradually extended eastward to include a market, that΄s been important to all Mani region. During this period new larger two-or three-story buildings were built with shops on the ground floor and houses on the upper floors and thus the settlement got its small town character. The building activity continued until 1940, when it began to decline.

Among the historical landmarks stand out the church of the Archangels dated from the 18th century and the Stone that served to support the Greek flag during the Revolution of `21. Despite its serious decline in population after the War (1945), it still remains the largest town and the capital of Laconian Mani. It features several pre- and postrevolutionary monuments (large and interesting houses, houses of prominent generations). The nature coexists with the built environment: small garden with olives, figs and mulberries and various wildflowers grow in the gardens and walls of houses. Nowadays, Areopolis has a number of excellent traditional restaurants (taverns) and bars.

This cavern has been described as the most impressive limnetic cavern of the whole world. It consists of three different caverns: the Alepotripae, Katafygi and Vlyxada that is the only one that is open for visits. Those caverns were first explored in 1950 from the famous couple of speleologists Petroxeilou. You can explore the inside of the cavern with little boats along with the boatman showing you around and giving you information about the history of the cavern.

The total length of the tour is about 1.2km long on boat and 300m on foot, and the duration is about 20-25min by boat and another 5-10min by feet. The temperature in the interior area of the cavern is around 16-20o C and the water temperature is around 12 C. Inside the Neolithic Museum that is located beside the cavern, you can see many priceless historical findings that can be dated back in the Paleolithic period. Diros caverns and the Neolithic museum are two of the most famous attractions for all Mani visitors.

Gythio is located in middle south of Peloponese at the center of the Laconian Gulf. It is a lively, charming little harbour town. The most of its houses are two- or three-storey neo-classical mansions, stuck to the steep side of the Mt. “Koumaros”. A long sea-side promenade, the colourful fishing boats, the narrow streets and stairways produce the typical Greek environment which faszinates every visitor. Gythio is protected by spurs of the mighty Taygetos mountain range.

Its highest “Profitis Ilias”, with 2.407 m the highest mountain on the whole Peloponese, makes a marvellous background scene. From November to May, the snow-white peaks are a magnificent sight behind the deep blue sea. A little island called “Kranai” and connected with the mainlaind by a short dam, protects the port of Gythio town from the open sea. It is a beautiful place with pine-trees and an ideal view-point to overlook the gulf towards the Parnon mountain range in the east and Taygetos in the north-west. As it is reported by Homer, the island was the first refuge of Helen and Paris on their journey to Troy. According to the myth, paris forgot his helmet on the islet as he was leaving – hence its name, since in Greek a helmet is calles “kranos”.

There are many beaches around of Gythio and the largest one is Mavrovouni-beach (BLUE FLAG). Because of its length of several kilometers it will never get crowded – just during the first half of August, when nearly all Greek people are on holiday, it may become a little more lively. In the afternoon, usually a perfect wind for wind-surfing will raise, and you can also hire a board and take lessons by the “Ocean Cafe”. Mavrovouni beach is one of the favourite places for the “caretta-caretta” sea turtles to lay their eggs in the sand.

JOIN US ON SOCIAL MEDIA
Menu 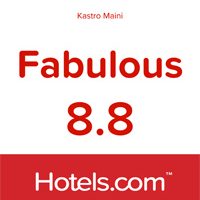 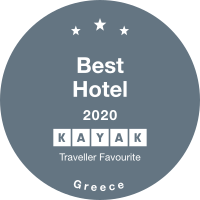 With great honor we present the awards our hotel has received for providing high quality hospitality and excellent holiday experiences.